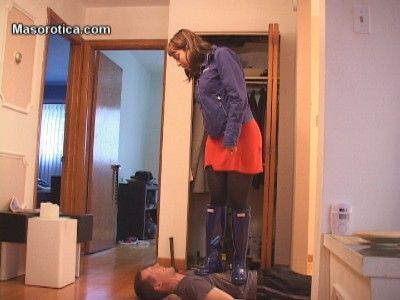 Mistress Milana did not like how other mistresses thought that she was a weakling and could not humiliate or torture a slave. She wanted to prove them wrong. When they brought a slave for humiliation, she did not have any mercy on him. She whipped him, trampled him, ball busted him and finally, she spit on him and forced him to swallow the spit. The other mistresses were surprised and had new respect for her.

Lady Suzanne loves to spit. She does it any time she wants. She wanted to humiliate her slave but she did not want to pain him. She decided on a different approach and settled on spit. She decided to make him drink her spit. She spit into a glass and mixed it with water and juice and made him drink it. He did not even suspect a thing as he drank it.

Listen you loser Jana is doing all of this for you. Watch as she takes an empty champagne glass and spits right into it. She's going to spit all of her incredible saliva into that glass for you. That thing is going to be full of her precious water. Then she's going to pour it out right into your mouth. You better not spill a drop of her glorious spit.

This guy screwed as his hands are tied behind his back. There's no way for him to get away from Jamie-Kate. He won't listen to her so she smacks him with her riding drop. Then she spit on her boot and forces him to clean it off. The only thing he's allowed to use is his tongue. He has to choice but to clean the spit off the sole of her shoe with his tongue.

Hey asshole what are you doing with those pants on? Take them off now! Now jerk off with that little thing you call a cock. I'm going to spit in this glass for you and I'm going to get close to filling it up. I want you to do the same. Now you little shit, I want you to blow your load into that same cup then take a nice big sip.

Goddess Pio wanted to clean her mirror. It had gotten a bit dirty and was not showing her sharp images. She is very conscious of her own image and she likes to make sure that she is well dressed. So she decided to use her own saliva since she felt that it was better than water. She spit on the mirror and had lots of spit on it before wiping the spit off leaving the mirror sparkling clean.

Anfisa is a mistress who likes to disgust other people. If she realizes that something she does it disgusting, she will redo it for fun just to piss off people. This time she was playing with her spit when she realized that it disgusted and pissed people off. She was overjoyed that she had found another weapon. She spit on any surface she could find and played with her spit and enjoyed watching people get disgusted with what she was doing.