These mistresses were looking for the best way to humiliate their slave. They decided not to inflict pain but to degrade and humiliate. They chose to spit on his face

LeaLexis and LindaRay are sitting on a settee and trade spit by spitting into their faces. One takes the spit from the others mouth and then wipes it all over her face. Same one takes some more of the spittle and rubs it on her breast where the other must lick it off. The Top looks into the bottom's mouth and makes sure there is more spit to gain and draws it out to smear all over the face of the bottom and on herself to be licked off. 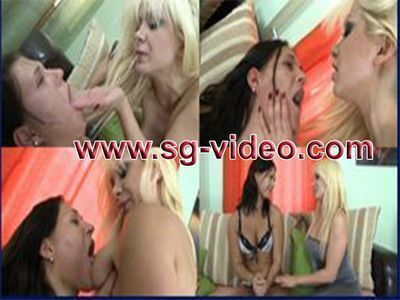 This beautiful mistress is hard-core into humiliation and other things that will make her slave feel very stupid and worthless. One of my favorite things to do is to open her mouth so that she is able to show her slave that she has warm saliva waiting for him. She is going to instruct him to open his mouth so that she is able to spit directly into his mouth and make him swallow. 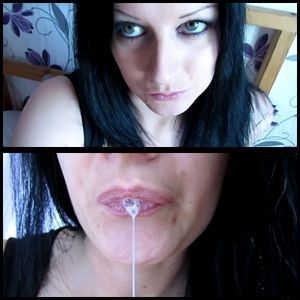 Svenja is a lovely woman that has a great time with her slave. She has always been very dominant, therefore she gets what she wants. She will even take the time to spit on her own boots, because she is going to have a slave clean up the entire mess off the floor and her boots. She enjoys torturing a slave in making a save feel like a complete loser.

Sarah forces her slave on the ottoman and couch. She sits on his chest and in her short skirt, reveals her red panties. Further humiliating him as each time she spits in his mouth. To make matters worse, she warps her hands around his throat and still forces him to swallow with each bounce on him and another wad of spit into his mouth. The humiliation builds as she chokes him and still forces more spit for him to swallow.

Mark is pinned on both the couch and the ottoman. Sarah sits on him putting pressure on his abdomen. Her short skirt slides up as she rocks back and forth forcing more spit into his mouth. As she flashes her panties, she rocks on his abdomen, then puts wad after wad of spit into his mouth. Not satisified that he is hurting badly enough, she proceeds to choke him while demanding he swallow more and more spit down his throat.

Stellina is outside spitting

Stellina it's a woman that enjoys being outside hanging out. She always has been very unusual, but her love for fetishes is one of the best. She can literally train a spit slave in a few sessions, because she is so brutal and sadistic. The slave knows to open his mouth and swallow all of her warm saliva. She is going to always be the best when it comes to training a slave properly.

Outside, wearing parkas, these two girls take turns. They puff their cigarettes and then spit on the slave kneeling before them. Their smoke filled spit is sprayed on his face until it is running down onto his clothing. The smoke turns the spit yellowish. This foulness is then left on his face to further humiliate him outside for anyone passing by to see. There is spit after spit on this pathetic, kneeling slave. Big gobs and small gobs strike his face.

Goddess Anna is amazing when it is time to dominate a slave. Her extensive experience in humiliation makes her one of the best women for a session. When she decides it is time to train a spit slave, she will make sure that he is one of the best. He will open his mouth and drink every single bit of her saliva without saying a single word and most spoken to.