Goddess Roxy and her friend wanted to have some fun. They had been busy and they wanted to take some time off and unwind. So the mistresses sat down and came up with something interesting to do. They settled on getting losers and using them to try spit fetish. The mistresses had a great time doing all sorts of things to the losers including spitting on them and forcing them to swallow the spit. 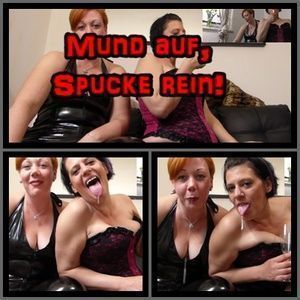 Mistress has her cake and eats it

This mistress likes having her cake and eating it too. Today she came home with two losers. She had fun making them lick her feet as well as her tits and her pussy. She had her fun and when she had an orgasm, she humiliated them. She forced them to lick her spit and she degraded them cruelly. She also yanked their hair and painfully dominated and humiliated the poor guys.

Mistress Erika did not like how late her boyfriend came home. She work up and woke him up as well. She was brushing her teeth and getting ready to go out so she brushed and spit into his mouth. She told him she would not condone him coming home late again and if he did it again, she would make sure his punishment was ten times more severe than just spitting into his mouth.

Madame Marissa is an unforgiving mistress. When her slave messed up, she did not want to know whether it was his first time or whether it was a small mistake. All she cared about was punishing him and she did. She took him to the kitchen and had him kneel down. She then used a funnel to spit directly into his mouth and she had him swallow her spit against his will.

This mistress was not in the mood to play around. She had to make sure her slave was punished as he was behaving badly of late. She spat on the sole of her boots and she forced him to lick it clean. She did not care what he felt and how degrading it was. She made sure he licked her spit and he swallowed it before she gave him a warning that the next punishment would be worse.

Mistress gets guy to lick her spit

This mistress is naughty. She likes doing things that your average girl would not do. Guys love her and how daring and naughty she is. But sometimes they discover it is not as they imagined. She made this guy for instance lick her spit from the soles of her shoes. She made sure the guy did it but she rewarded him with the craziest sex he had ever had in his life.

Miss Jenna took her sneakers and she used them to humiliate her slave. She knew wearing them for a few minutes would make her feet sweat so she wore them. When she felt her feet were smelly enough, she spat on her feet and she made her slave lick her feet. She enjoyed watching him do all the nasty things she made him do and told him never to mess with her.

Sexy mistress humiliates guy with her ass and spit

She knows she has a sexy ass and when a guy shows interest and she does not like the guy, she knows she has license to humiliate him. That is what this mistress did to this loser. She facesat on him and she humiliated him with her spit. She made sure he was as humiliated as he had never been and by the time she was done with him, she had had a lot of fun.

Mistress Candice knew how to disgust people and spit fetish is one of her preferred methods. She wanted to teach mistress Alice how to do it. She enjoys how she is able to use it to humiliate those she wants to humiliate. She loves how easily she can disgust someone using her spit. However, she had not done it in a long time and she wanted to have some fun with it together with her friend so she taught her as they enjoyed spit fetish together. 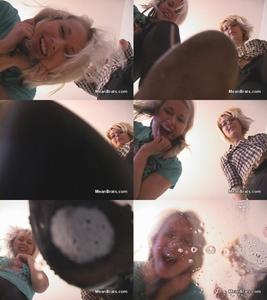